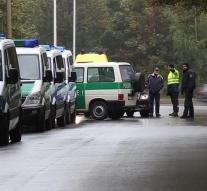 - German police are searching for a 22-year-old Syrian man suspected of preparing an attack. After a tip of the secret intelligence service Saturday was a house in the eastern German city of Chemnitz, who used the man searched by anti-terrorist police, while explosives were found. The man himself was not found.

The police of Saxony has already circulated a photograph of the suspect, who is labeled as ' dangerous. '

Part of the residential Fritz-Heckertwerd in the south of the city was evacuated as a precaution and residents were asked to stay indoors.