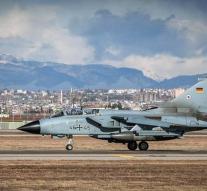 berlin - Germany has begun to withdraw its troops from the Turkish air force base Incirlik on Sunday. From that base, the Germans supported international operations against Islamic state in Syria and Iraq.

Germany withdraws its troops after the Turkish authorities have repeatedly not given German parliamentarians permission to visit their own troops who have been in Turkey.

The German parliament approved the withdrawal of German soldiers in June. The approximately 260 men and several Tornado types and a tanker are moved to Jordan. Their work is therefore quiet for about two months.

Relations between both NATO countries have been tense since Germany gave asylum to Turkish officers accusing Ankara of being a member of the Gülen movement. According to the Turkish government, that movement was behind the failed coup in July last year.