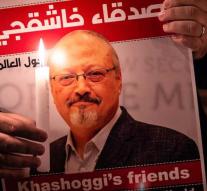 brussels/berlin - Germany has imposed an entry ban on eighteen Saudi's. They are suspected of having been involved in the murder of the Saudi journalist Jamal Khashoggi. The journalist lived and worked in the US and was very critical of the Saud family clan that rules Saudi Arabia.

The German Foreign Minister, Heiko Maas, announced the entry bans on Monday in Brussels. According to him, other European countries have also issued these entry bans. According to Maas, Berlin has made a lot of pressure for this step with, among others, Paris and London.