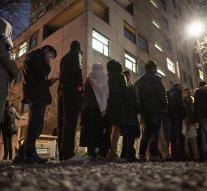 - In Germany, this year one million registered refugees. The number exceeds all predictions, including that of the Minister of the Interior, Thomas de Maizière. He foresaw the arrival of 800 000 asylum seekers. But Tuesday, the count is one million said the Bavarian Minister of Social Affairs Emilia Müller. The Bavarian Christian Democrat Müller said that it is high time to establish a maximum number.

The power is particularly in November increased considerably. Only in that month 200 000 people have registered as refugees in the Federal Republic.Some observers argue that the actual number of migrants has gone to Germany, is greater than the indicated official registration. Others think that the number is lower because a number is registered in multiple centers as a newcomer by the bureaucracy of the enrollment.
NEW