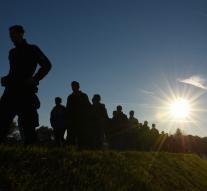 - The German federal government was prematurely aware of the approaching refugees. The EU's border control agency Frontex has already warned Germany in the spring. Welt am Sonntag reported Sunday based on proprietary research director Fabrice Leggeri in March announced a new record number of refugees in Europe.

Germany is alleged that it was not sufficiently prepared for the flow of refugees to the borders of the European Union, while the country was warned in time. So Leggeri reported in June in a meeting with representatives of the Bundestag, " the number of refugees that the border between Turkey and Greece crossed compared to the spring had increased by 550 percent. " That number, according to the director of Frontex to the Ministries of Interior and General Affairs informed.