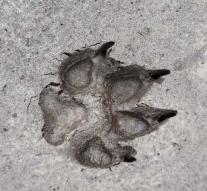 dresden - For the second time, a 'problem wolf' was shot dead in Germany. It was a wolf in the Land of Saxony who had bombed two dogs in December and had come dangerously close to people several times.

The wolf is a strictly protected animal in Germany, but in exceptional cases permission is given to finish an animal. This happens when there is a danger to the population or there is a threat of major economic damage.

In April 2016, a 'problem wolf' was already being considered. This Kurti had attracted attention in Lower Saxony because he had approached people up to a few meters and had bitten a leash.