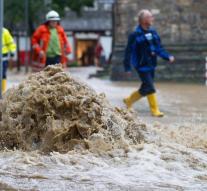 goslar - Day-long rainfall is causing ever-increasing problems in the eastern part of Germany. In the states of Lower Saxony, Saxony-Anhalt, Thuringia and, to a lesser extent, Brandenburg and Bavaria, there is water pollution. A woman is missing.

Cause is the low-pressure area Alfred that is above the country, which for the time being affects the weather. In the Harz region, the inconvenience is greatest. In the region around the city of Goslar (Lower Saxony), local authorities issued a so-called 'disaster alarm', which caused a crisis to take relief. In some places, 171 millimeters of rain fell in two days.

In the inner city of Goslar, streets are clear. A hotel and a hostel for the elderly were evacuated and the train traffic stopped.

In the place of Wernigerode in Saxony-Anhalt, a 69-year-old woman is missing. She is feared to have disappeared in the heavily swollen River Holtemme that flows past her house. In Hildesheim, emergency services are ready to evacuate parts.