Home / World / Germany is groping over a big fire 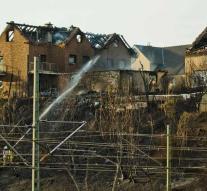 siegburg - The German authorities are in the dark about a fire that started on a high-speed line on Tuesday. In Siegburg, south of Cologne, several houses went up in flames along the track. 32 people were injured by the fire.

The fire may be caused by sparks from a train passing by. But it also takes into account arson or a discarded cigarette butt. 'The cause of the fire is completely open, speculation is premature,' said a spokesman for the German railway company. The delays on the route between Cologne and Frankfurt of the Intercity Express (ICE) are now almost gone.

Because of the wind, the roadside fire quickly turned to nearby houses, reports broadcaster Westdeutscher Rundfunk.