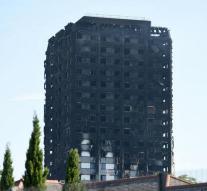 wuppertal - The German city of Wuppertal leaves an eleven-storey apartment building clear due to fire hazard. The building has sheets similar to the London apartment, where a major catastrophic fire was raging recently.

The city showed Tuesday that the decision on evacuation has just fallen due to the fire. By the fire in Grenfell Tower in Kensington, 79 people were killed. Among other things, the fire could spread rapidly through the flammable wall panels with which the living tower was lined.

Meanwhile, other flats are being investigated in Great Britain. Of the 95 buildings viewed so far, there was no one to comply with the fire safety regulations.