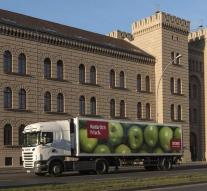 - Germany conducts mid-2018 truck tolls on roads. The German Parliament decided Thursday, the day that was agreed in Brussels on tolls for passenger cars. However, the extension of tolls for new trucks away from.

At present, trucks heavier than 7.5 tonnes pay tolls on highways and several roads widened to four lane roads. The Bundestag decided that extend more than 15 000 kilometers with 40 000 kilometers of smaller roads. It is even possible to levy tolls on smaller roads to avoid traffic diversion.

The extension of the toll accounts for an annual two billion euros in revenue.