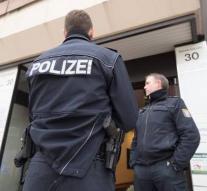 hamburg - The German authorities have arrested a 31-year-old Turk on suspicion of espionage. Justice suspects him of spying on Kurds and their organizations in Germany. The man was arrested Thursday in Hamburg and is still in custody.

The alleged spy was, according to prosecutor interested in political activities of the people and institutions that he followed. Turkey has repeatedly complained that European countries are not doing enough against the PKK, who normally very regular attacks on Turkish police and soldiers and is prohibited in the EU and on the list of terrorist organizations. Conversely, European politicians often disturbing to the 'long arm' of Ankara.

As Foreign Minister Bert Koenders called this week the Turkish ambassador on the carpet, following reports of spying by the chairman of the Dutch branch of the Turkish religious authority Diyanet. Yusuf Acar, on the Turkish Embassy in The Hague works, collected information about supporters of cleric Fethullah Gulen. He himself finds nothing wrong with that, because the information is public.