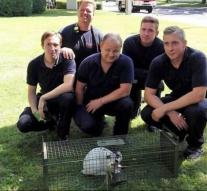 kamp lintfort - A German couple appears to have brought a rabbit from Texel to their hometown of Moers, more than three hundred kilometers away.

The family had already noticed that the rodent was close to their car. When she once again emptied the car, the animal jumped out of the trunk and drove under the engine valve where he got squeezed. The fire brigade had to release the unfortunate crush.

Meanwhile, the owner of the rabbit reported: a German woman who was also on holiday at Texel. Soon she will be reunited with the travel-rabbit.