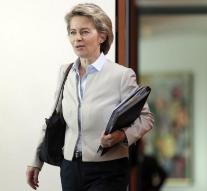 berlin - The German army will remain in Afghanistan for at least five years, probably even longer. 'In Kosovo we have been stationed for twenty years, in Afghanistan it is likely that an even longer effort will be needed to get a stable situation,' said Defense Minister Ursula von der Leyen.

German soldiers have contributed to security in Afghanistan since 2002. In that year, the Netherlands also started its support.

How long the Dutch soldiers still stay in Afghanistan is unclear. By 2016, the government extended the military contribution to the NATO mission by one year, due to the country's worrying situation.