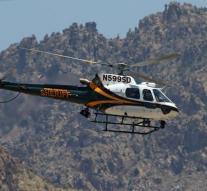 tucson - Two researchers from Germany, during a walk in the scorching heat in the US Arizona died.

A third man, a colleague of the two others survived completely dehydrated and severely wounded the trip through the Santa Catalina Mountains. His 57-year-old and 33-year-old colleague were recovered by the emergency death.

The researchers were late last week for a conference of the Optical Society of America came to Tucson. Sunday they wanted to take a walk on the Ventana Canyon Trail. Why have they ignored the warnings about an impending heat wave in the region, is not clear. Tucson were the temperatures above 40 degrees Celsius. Sunday, a record temperature of 46.1 degrees was measured.


After an emergency rescue workers discovered at the beginning of the path one of the three men, who were taken to a hospital. At the end of the 8.5-kilometer trail they found the 57-year-old man. For him it was no help possible. The 33-year-old was found later.