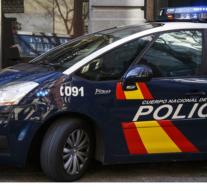 - Spanish police have freed a German who for two weeks was detained at his home in Torrevieja and was abused badly. The man showed signs of torture except also symptoms of malnutrition. There are five people arrested in his house, three men and two women aged from 26 to 37 years.

This was reported by the Spanish news agency Europa Press Sunday.

The victim was with two broken ribs, a punctured lung and numerous bleeding hospitalized. The police came into action when the sister of the victim came forward and said her brother was kidnapped and the kidnappers had demanded a ransom.