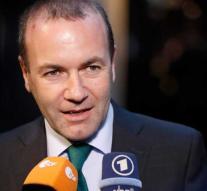 brussels - The group leader of the Christian Democrats in the European Parliament, Manfred Weber, wants to become the next President of the European Commission. The 46-year-old German announced his official candidacy on behalf of the European People's Party (EPP) via Twitter.

Weber is the first to sign up for the job. Following the European elections in May next year, a successor to the current President of the Executive Board of EU, the Luxembourger Jean-Claude Juncker, should be elected.

The European Parliament demands that it be a so-called Spitzen candidate, the candidate of the political group that gets the most votes in the European elections. At a summit in February, however, it turned out that a large majority of EU leaders would be able to decide this 'autonomously', while taking into account the election results. Prime Minister Mark Rutte is one of them.

The decision as to who the Spitzen candidate will become for the EPP falls on the party congress in Helsinki in November. More names are circulating in the rumor circuit in Brussels, including that of brexit negotiator Michel Barnier and Finnish former prime minister Alexander Stubb.