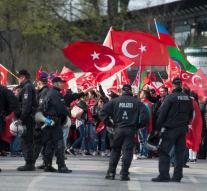 - The Turkish community in Germany has called for calm by the German Foreign Minister Frank-Walter Steinmeier. Cologne stands for Sunday planned a large demonstration to show support to the Turkish President Recep Tayyip Erdogan. As expected 30,000 protesters. There are also already announced four counter-demonstrations.

,, The domestic political tensions bring from Turkey to Germany and intimidate people with different political views, from any angle whatsoever, I can not, '' said Steinmeier told the daily Süddeutsche Zeitung.

Sigmar Gabriel, vice chancellor and president of the Social Democratic Party SPD, wrote on his Facebook page in German and Turkish that everyone should help to avoid the divisions in Turkey continues in Germany.,, My request: Treat dissenters with respect. Also fundamental differences should not lead to division. Germany, the home of all the people who live here. '

Police in Cologne announced Friday to crack down on any form of violence. There are 2300 agents are used to prevent riots. The atmosphere between supporters and opponents of Erdogan in the Turkish community in Germany has been tense since the failed coup in Turkey from July 15th.