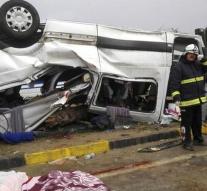 istanbul - Due to an accident involving a tourist in Turkey, three Germans were killed and eleven injured. According to Turkish media, the driver of the van had lost power over the wheel during rain, causing the vehicle to bump into a palm tree.

The driver had taken the tourists from Antalya airport shortly. The German travel company would go to the Manavgat holiday resort. However, on the highway it went wrong. The police stopped the driver.