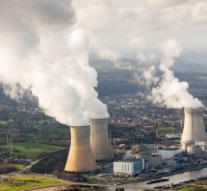 - Fearing a nuclear disaster in neighboring Belgium beats the German state of North Rhine-Westphalia millions more iodine tablets. The tablets offer some protection against radioactive iodine that may be released in an accident in a nuclear power plant.

North Rhine-Westphalia has no nuclear power plants, but just across the border in the Belgian Tihange is there a. Germany and the Netherlands are worried about the plant, because it showed defects regularly in recent years. Even the equally ponderous power plant in Doel, which is near Antwerp, worries Netherlands.

The German state will soon have enough tablets for all citizens who need extra protection, a spokesman said. Last year the group was extended by the government in Berlin. Now, all pregnant women, nursing women and minors in the state into account. For those living less than a hundred kilometers of the offending Belgian central and younger than 45 tablets are in case of radiation also ready.