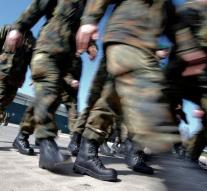 frankfurt - A 28-year-old German military who, according to justice, had plans to commit a terrorist attack, has appeared as a Syrian asylum seeker.

The lieutenant from Offenbach was stationed in the French Illkirch, near the German border. Last January he caught sight of the Austrian authorities because he tried to hide a loaded gun in a toilet at the Vienna airport. When he returned to the weapon on February 3, he was arrested.

During the investigation, the military, whose name was not known, had registered in the German Giessen in 2015 as an asylum seeker. How that could be done is unclear. He used a false name but did not speak Arabic himself, according to the prosecutors.

The military entered the asylum process and came to an azc in Zirndorf, Bavaria. During that time he also traveled up and down to France, where he continued his work as a military. 'It seems that he led a double slave,' said the prosecutors.

Alien hatred would have been the motive of the perpetrator. By pretending to be an asylum seeker, he wanted to push the refugees into debt.

In the case, a 24-year-old man was arrested who would have warned of the military's plans.