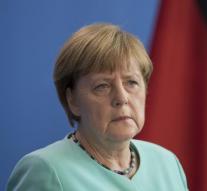 - Germany's security cabinet is Saturday led by Chancellor Angela Merkel at midday meeting in Berlin to reflect on the shooting Friday in Munich. An eighteen year old German Iranian shot there in a mall nine people dead and then committed suicide probably.

At the meeting of the security cabinet is also Minister Thomas de Maiziere present. Which broke after the shooting of a residence in the US and gallop traveled to Berlin. De Maizière will consult prior to the cabinet meeting with, among others, representatives of the German security services.