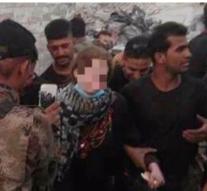 mosoel - The 16-year-old German scholar Linda W., who traveled to IS area last year, was recently arrested in Mosul. The girl would be part of a group of twenty female warriors from the Islamic State terrorist group. That is what the German newspaper Die Welt reports.

According to the newspaper, women were hiding in an underground tunnel system. During the detention of the warriors bombs and weapons were found, a spokesman for the Iraqi army was told. The girl from Sasken was in association with four other German women in her arrest. Women from Russia, Canada, the Caucasus, Canada, Libya and the Czech Republic also hid in the tunnels.

The German would have left Syria a year ago after being converted to Islam. When the girl disappeared tracefully, her parents gave her missing. The police put a big knock hunt on rope to find Linda. The authorities then discovered that she was in Syria and she fell in love with a Syrian who had met them online.

Mosul was captured last week by the Iraqi army after the city had long been in possession of IS. Many IS warriors tried to escape Mosul during the reunion by swimming across the river Tigris, dividing the city into two. The militants saw the army pulling up and tried to escape. The army shot thirty of them dead.