Home / World / German rapper slain by attacking US IS 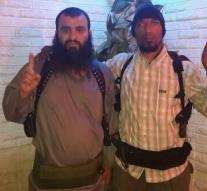 - A German ex- rapper who had joined the Islamic State (IS) in Syria was killed by a US airstrike. US officials have said Thursday. On social media in recent days were already rumors that Denis Cuspert, as a rapper under the name Deso ​​Dogg, was slain. Probably an air strike on

The Cuspert born in Berlin joined in 2012 at IS. He appeared in propaganda videos which, inter alia tried to persuade foreigners about to join IS. In 2014 he held a video a severed head. That would have been a man who had turned against IS.