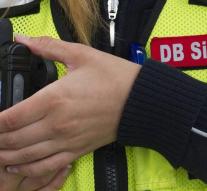 - The German railways would take several hundred extra people in the coming years to improve the security on trains and at stations. Following the recent attacks in Germany, including in a train in Würzburg on July 18. A refugee cut with knife and ax on passenger and wounding five.

At present, Deutsche Bahn has approximately 3,700 employees engaged in security. In addition, the Federal Police employs 5,000 people who keep an eye on track and stations.

The railways are not the only body which aims to increase the safety of citizens. On Tuesday, the government of Bavaria already announced measures. Better equipment for the police action number one, said Prime Minister Seehofer. He hopes that other states will follow suit.