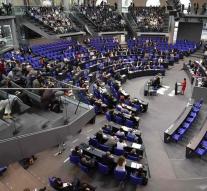 dusseldorf - Leaders of all parties in the German Bundestag expressed their positive opinion about the renewal of the ruling period. According to German media, they prefer elections every five years than every four years.

On September 24th, Germany will elect a new parliamentary representation. Presidents of political parties point out that election campaigns take time and that a coalition must be formed after the elections.

All this time is at the expense of time to rule. In addition, elections every five years are also common in most German regional parliaments and in the European Parliament.