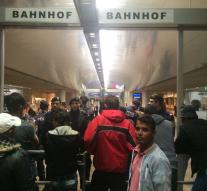 - In the first three weeks of November, 180,000 refugees in Germany traveled. It has notified the German Federal Police.

The German magazine Die Welt writes Monday that the reduction in the number of refugees hoped by the government in Berlin because of the unseasonable cold, not true. The number of migrants only grow. Last weekend passed no less than 14 482 refugees to the German border. 181. 000 migrants were counted throughout October

The forecast of the German government that around 800 000 refugees in 2015 coming into the country is exceeded. With five weeks to go this year, there are already 938. 000 people registered.