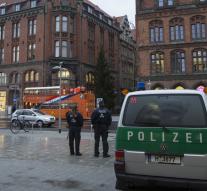 - The German police Monday in a shelter for asylum seekers in the town of Heinsberg near Cologne arrested two men. The police acted after statements from witnesses who said that in the shelter "several persons of Arab origin " ceased who came from Paris and Belgium. This was reported by the German news RP Online.

The police set up a special detention unit in the district after first Gangel- Langbroich was completely dropped. According to the police one of the men arrested a 28-year-old Tunisian. The second is a 18 year old man from Syria. The latter has since been released.