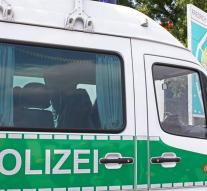 - "German police have arrested a terror suspect. It is a 24-year-old Syrian who is suspected of terrorist Nusra Front have been fighting."

"The suspect was placed in a refugee camp in Böblingen in Baden-Württemberg, the prosecution stated in Stuttgart Monday. The Syrian, who came to Germany in September 2015, has not been associated with planned or carried out attacks in Germany, according to the OM."