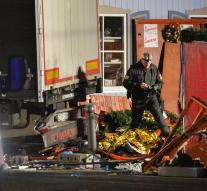 berlin - German police are under high pressure to find the perpetrator of the attack on the Christmas market in Berlin Monday which killed twelve people. Investigators say they have about five hundred clues and traces that might lead to the perpetrator or perpetrators.

These include statements made by eyewitnesses and DNA traces in the cab of the lorry on which the attack was committed. Interior Minister Thomas de Maiziere said on German television that the police are certainly not in the dark. ' And no one will rest until the perpetrator or perpetrators are caught. '' In police circles, the expectation was expressed that Wednesday a possible new suspect will be caught.

Tuesday night decided prosecutor in Karlsruhe that the suspect who was arrested shortly after the attack, had to be released. The investigation has yielded no urgent suspicions against the man so there was no reason to hold him longer.