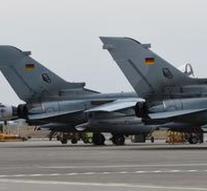 berlin - The German Air Force Tornado Reconnaissance Aircraft resumed exploration flights over the territory of Islamic state in Syria and Iraq. The first devices rose Monday from the base of Al-Ashrak in Jordan. That has confirmed the commander of the unit.

His part previously operated from Incirlik, but was taken away because the Turkish authorities refused to allow German parliamentarians to visit the Incirlik-based soldiers. Of them, 250 were transferred. In the coming period, they will support the Western Alliance air attacks with just four Tornados instead of six. These are going to make high resolution photos of possible IS goals.