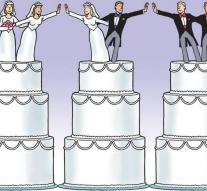 berlin - The German parliament is on a Friday for a historic decision: the Bundesdag takes a decision on the opening of marriage to all. If the majority agrees, as expected, Germany can also marry homosexual couples soon.

A first bug was taken in the morning: in order to be able to vote on the bill, the daily planning had to be adjusted. There the majority could find themselves.

A week ago no-one had yet expected a decision to be taken soon. Christian Democratic CDU and CSU of Chancellor Angela Merkel have always been against the marriage of gay. But Merkel suddenly made an interview on Monday night in an interview that she is mainly aware of a matter of conscience and that she is not against a free vote in parliament.

Merkel did not speak out before marriage, but that does not make much sense for the outcome. The left-hand parties, SPD, the Greens and the Left are in any case. Together they occupy a tight majority and within Merkels party are also advocates. Only the conservative wing of CDU-CSU is against.

If the marriage is happening now, the SPD will be an election theme for the party to distinguish itself from Merkel.