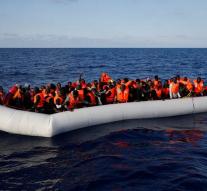 - In a major rescue operation the German Navy Saturday, 1286 refugees rescued from the Mediterranean Sea, reported the German army. The migrants, 990 men, 220 women and 76 children, floated 80 kilometers off the Libyan coast in wooden and plastic boats. The refugees are transferred to the authorities in Italy.

In the past seven weeks, the German Navy as part of the maritime mission in the Mediterranean, called Sophia, already 16 389 people rescued from drowning. Earlier this week, agreement was reached on extending the mission. The EU mission is to combat smuggling from Libya, is now also help to maintain the arms embargo against Libya.