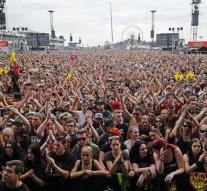 nurburgring - The rock am Ring music festival in the German city of Nuremberg is suddenly broken down on Friday night. The police are trying to evacuate the site. There would be a terror threat.

That is the announcement of the festival via Twitter. It is unclear exactly what the threat entails. Visitors are invited to leave the festival grounds and return to hotels or campsites.

All performances of Friday night would have been canceled. It is unclear whether the event continues Saturday and Sunday. Rock am Ring is Germany's most famous rock festival. The festival usually attracts 90,000 visitors.

In total, almost 100 acts take place during the festival, which lasts three days. On Friday evening, Rammstein would perform.