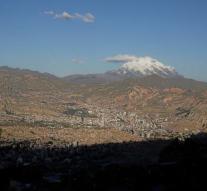 la paz - A German alpineist died in climbing the 6438 meter high Illimani in the South American mountain range of Andes in Bolivia. Rescue workers announced on Tuesday that the body of the 29-year-old man was found after an eighteen-hour search.

He would be surprised by an avalanche and buried. His body has been transferred to the Bolivian capital of La Paz. A guide accompanying the man was injured. The Illimani is Bolivia's second highest mountain.