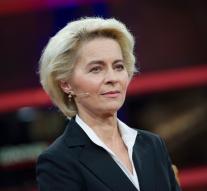 - The German Minister Ursula von der Leyen (Defense) is skeptical about the authenticity of the Syrian passports found with the corpse of one of the bombers in Paris. She said Sunday evening on German television that the document may have been forged.

Von der Leyen is " very unusual " that a refugee registration option in three countries. The minister did not rule out that this is a deliberate deception attempt. She called the Germans on Syrian refugees not to make them scapegoats for the terrorist acts of Islamic State.

The minister is not the first person who doubts the authenticity of the passport found. A US intelligence official said earlier on the American CBS News that is not the same number of digits on the document as an official Syrian passport.