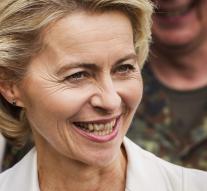 - The German Defence Minister Ursula von der Leyen (CDU) has provided shelter for months on the 20-year-old Syrian refugee Karim. She also helped him with his asylum request, finding a training and integration. Karim has enriched our lives, said the minister to Bild am Sonntag .

Karim fled in 2011 from Damascus. After his stay in Jordan, he came up in 2014 in Düsseldorf. Since it did not go well with Karim and that did not go unnoticed by the children of the German politician who since 2011 had contact with Syrian refugees. The daughters of Von der Leyen Karim knew even all of horse racing, one of them was even his teammate during a tournament.

The daughter alerted their mother Karim then offered the attic. Until the spring of 2015 the Syrian stayed at the family home in Burgdorf.

The boy now lives in Hanover, his asylum application is accepted and he is doing a pilot training. He also helps other refugees in translating documents.