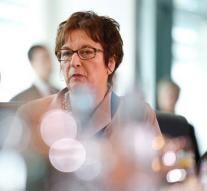 berlin - The European Union must quickly contemplate countermeasures against US sanctions policy. Washington is preparing new sanctions against Russia, which also focus on European companies.

That is unacceptable and contrary to international law. This is the German of Economy and Energy, Brigitte Zypries, who said in Die Zeit on Monday.

For example, the USA punishes German companies because they are active outside of Germany. 'Of course, we do not want a trade war, but it is wise that the European Commission is now busy with a response to US sanctions.'

The US Congress voted last week for new and unconditional sanctions against Russia. Washington is angry because Russia would have mixed in the US presidential elections.