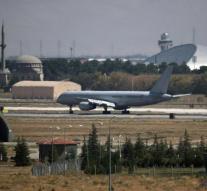 konya - A delegation of German parliamentarians visited the German soldiers at the base in Turkish Konya on Friday. The visit would take place in July but was held by Turkey because of tensions between countries.

Following NATO's mediation, Turkey and Germany agreed on a visit under NATO's guidance.

According to German media, seven MPs together with deputy chief of NATO Rose Gottemoeller visited the base. On the basis, stations are stationed that assisted in the fight against Islamic state in Syria and Iraq. The visit of the parliamentarians took about three hours.

Because Turkey has repeatedly refused a visit to the base of Incirlik, Germany has decided to remove its troops there and move to Jordan.

A spokesman for the German Ministry of Foreign Affairs called the visit, 'of course no permanent solution', for tensions between countries. There will have to be another solution, and that is work for a new government. In Germany later this month parliamentary elections will be held.