Home / World / German IS member is entitled to sixfold murder 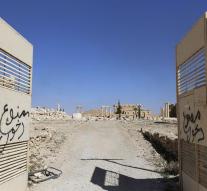 hamburg - A German former member of Islamic State (IS) will be tried in Germany for coercion to sixfold murder. The 28-year-old man from Bremen, who is in Germany, would have participated in the shooting of five Syrian soldiers and a sonic preacher in 2015 in the Syrian city of Palmyra.

The man was convicted in July last year for membership of a terrorist organization. After the conviction, video material was discovered after which the German justice formulated the new charge.