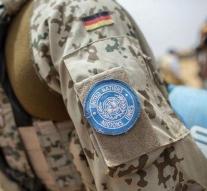 berlin - A helicopter of the German Air Force has crashed in Mali. As a result, the two occupants came alive, a spokesman for the UN peacekeeping force said in the African country.

The German army has been participating in the peace mission Minusma in Mali since 2013. The occurrence of the accident with the Tiger type device is unknown. The two killed occupants are Germans.