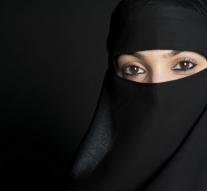 - The German government wants to ban the wearing of face-covering clothing to include education, the municipal service and in the courtroom. The burqa ban, as the measure is called in the vernacular, according to the government must not serve the security, but the civility.

,, We reject the burqa entirely off, 'said Interior Minister Thomas de Maizière Friday.,, That does not fit into our open land. '

De Maizière has acquired the support for the measure of the responsible state ministers. A similar ban is already several years in force including the Netherlands and Belgium.