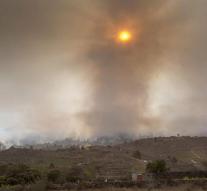 - Spanish police have arrested a 27-year-old German who has admitted accidentally caused a forest fire on the Canary Island of La Palma. When fighting the fire is a ranger killed.

About seven hundred people have been evacuated as a precaution because of the fire, which broke out Wednesday and has been fueled by the wind, it got out of hand. According to Spanish media was caused by the fire would burn the Germans used toilet paper. The fire department is still busy putting.

The last major fire was on La Palma in 2009 when four thousand people were evacuated.