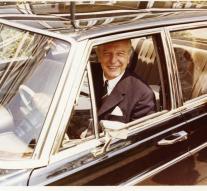 - Former German Federal President Walter Scheel is deceased at the age of 97. His liberal party FDP reported his death Wednesday.

Scheel first sat in the Bundestag and became minister in 1961. First he led the Ministry of International Cooperation and Development, between 1969 and 1974 he was foreign minister and vice chancellor. Then he became president, a largely ceremonial post. He remained head of state until 1979.

The liberal politician was during World War II by the German Luftwaffe. Immediately after the war in 1946 he became a member of the FDP.