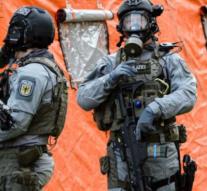 berlin - The German police, in collaboration with all emergency services, scientists and government crisis teams, have conducted a large-scale exercise in preparation for a biological terrorist attack. In this case with pest bacteria and the deadly poison ricin.

The scenario began with a photo exhibition of muslim sports enthusiasts with two hundred invited guests. Shortly thereafter, several visitors became sick, three died. Doctors found pest bacilli and ricin as a cause. The police suspected a terrorist attack with a jihadist background. A fingerprint led to a suspect. The special command group GSG 9 made an invasion of the man's house on Wednesday morning.

The heavily armed agents, equipped with gas masks, found a laboratory, 'a body', suspected victim of infectious disease, and another suspect. This was taken out of combat. He also seemed sick. There was a big alarm to prevent an epidemic.

The practice, Wonderboom named for the plant producing ricin, required two years of preparation. Among other things, the FBI and European police organizations were invited to come and watch