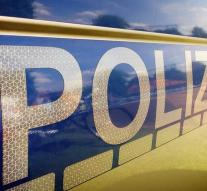 hameln - A woman has been hit seriously injured in Germany after she was tied behind a car and was dragged through the streets of the city of Hamelin. The 28 year old was with a rope fastened around her neck on the towbar of a car.

A 38-year-old man has been reported to the police and confessed that he had bound the woman. He surrendered and was firmly put no resistance, police announced on Monday. The woman was found Sunday on a sidewalk by passers-by who inseinden emergency services.

The motive, the police scanned even in the dark.