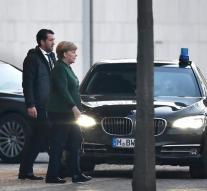 - The leaders of the coalition parties in Germany, the sun not yet agreed on a joint candidate for the post of president. The concert was interrupted and will continue Monday, so showed Chancellor Angela Merkel (CDU), Horst Seehofer (CSU) and Sigmar Gabriel (SPD) know afterwards.

The SPD, the current Foreign Minister Frank-Walter Steinmeier (SPD) pushed forward as a candidate to succeed Joachim Gauck next year. The 76-year-Party politician stops working after a time because he considers himself too old.

The question is whether the two conservative parties can live with the SPD candidate. If not, he will have to compete against a likely candidate to be nominated by the CDU / CSU.

The new president is elected on February 12 by a special session of parliament.