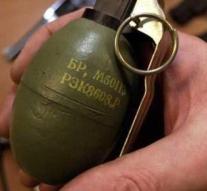 gladbeck - A four-year-old from Gladbeck (North Rhine-Westphalia) took home a grenade after a holiday in the Netherlands. The lad had found the explosive from the Second World War when he was playing on the beach, reports the Westdeutsche Allgemeine Zeitung.

The parents of the boy initially did not notice anything. They only noticed on returning home that a suspicious object was in their son's bag, which was about the size of a banana.

Then they immediately called in the emergency services. Experts took the explosive from the house.