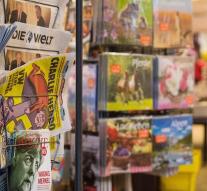 - Angela Merkel graced the front page of the German version of the satirical magazine Charlie Hebdo. The drawing is the Chancellor in a garage on the bridge for maintenance, while a mechanic arrives with a component. Underneath the text: 'New outlet underneath and it will last another four years.'

Besides Merkel, who 'VW full support,' Frauke Petry is taken on the heel. Her caricature on the back. The leader of Alternative for Germany (AfD) has received a hairstyle reminiscent of Adolf Hitler. It is characterized with: 'skull, she has been only the mustache is still missing.. '

The first issue of the German Charlie is since Thursday in the kiosks. The magazine is published weekly with a circulation of 200 000 copies and counts as the French original sixteen pages. The editors in Paris, where IS terrorists wreaking carnage two years ago, made the cartoons and translate the accompanying text. The makers will also work with German political cartoonists and columnists publish in the future but the familiar, critical tone remain faithful.