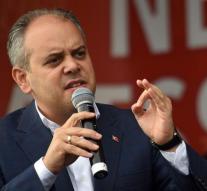 ankara - The German television channel Deutsche Welle has filed a civil case against the Turkish Ministry of Sport, which earlier this month recordings of an interview took with the minister. That has let the sender know Monday.

DW-presenter Michel Friedman interviewed Sports Minister Akif Cagatay Kiliç early this month for Conflict Zone program. To the displeasure of the minister stated Friedman more questions about the failed coup, press freedom and the position of women in Turkish society.

After the interview, demanded an employee of the ministry that the images would not be broadcast. When Friedman was the images were confiscated here against. All requests from DW to recover the images were ignored by the Turkish authorities.