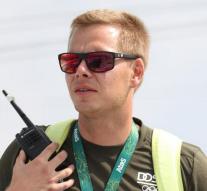 - The German coach of the canoe slalom, Stefan Henze, Monday deceased to the injuries he suffered last week after a serious accident in a taxi.

The 35-year-old coach was since Friday in critical condition in hospital in Rio de Janeiro and died Monday of his injuries.

Stefan Henze Friday became involved in a serious accident while he was with a colleague in a taxi drove back to the Olympic Village. In addition, he was seriously wounded in the head. Fellow Christian Käding got wounded too, but he has already left the hospital. It goes to circumstances well with him.


Every morning, immediately informed of the Olympic news? Subscribe to the Newsletter Telesport Olympics.